Physical health, mental health… but what about your digital health? 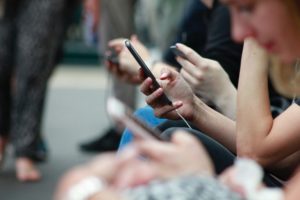 Last year, CBS’s 60 Minutes spotlighted a growing problem among all of us. How much time we spend staring at screens – phones, computers, TVs, tablets, etc.

Here at Tri-County Mental Health, our staff and consumers face the same challenges. But the question is: Can this be categorized as a true addiction or simply an unhealthy behavior? And what is this doing to our kids?

In 2017, U.S. adults spent an average of three hours and 20 minutes a day using their smartphones and tablets. This is double the amount from just five years ago, according to an annual survey of Internet trends. Another survey suggests most of that time is spent on arguably unproductive activities like Facebook, gaming and other types of social media.

We’ve asked doctors and other clinicians their opinions because we know screen usage is not officially categorized as a physical addiction according to the latest edition of the diagnostic manual used by medical professionals.

The amount of screen time spent per day is scary to think about, and it has been compared to the days when big tobacco was first learning that cigarettes were bad for our health. Technology, in many cases, is designed to be addictive, and a society that is “mobile dependent” has a hard time spending even minutes away from their app-enabled smartphones or tablets. Tech companies – mobile phone executives, game creators, app developers – purposely build devices and technology that we want to use more and more. This technology is designed so that we stay on it longer, try to make it to the next level, get more likes and check back often.

But here’s some positive news. In 2019 more and more people have started acknowledging their digital well being. Books, blogs, podcasts and news shows are addressing how much time we spend on our screens and encouraging individuals to reduce screen time as part of their digital health and well-being goals.

Today’s young people have been criticized because they’ve grown up with screens all of their lives and it has created unhealthy behaviors. They are uncertain about how to make eye contact, have a face-to-face conversation or be in a relationship without their phone. Many of us are ready to address our digital health for the first time.

To help us monitor our screen time, the latest tech update from the iPhone displays the total time you’ve spent using your phone as well as time spent on individual apps. Ironically, software developers have been on the forefront to solve the problem of tech addiction. In 2018, Apple shareholders called for the company to focus on how their devices impact kids. In a letter they wrote “social media sites and applications for which the iPhone and iPad are a primary gateway are usually designed to be as addictive and time-consuming as possible, as many of their original creators have publicly acknowledged,” adding that “it is both unrealistic and a poor long-term business strategy to ask parents to fight this battle alone.”

So in response, they’ve created apps that aim to help us disconnect from their devices. Some apps reward or even punish you for staying off your phone for set periods of time. Others block you from accessing certain sites or activities altogether.

Whether too much screen time is an addiction or not, the one thing that the clinicians at Tri-County can agree on is that if the behavior is creating adverse effects on someone’s life and overall well-being, it’s time to make a change.

Excessive tech usage can lead to:

What can we do to unplug?

If ditching your smartphone is too drastic, baby steps might be right. We know that constant connection to technology undermines happiness, relationships and productivity. Even if screen time isn’t officially an addiction, it might be time to reduce our usage with a few techniques that fit our individual lifestyle and improve living.

Note: How “addicted” are you to your cell phone?

We invite you to take this online Smartphone Compulsion Test, developed by David Greenfield, a psychiatry professor at the University of Connecticut who also founded the Center for Internet and Technology Addiction. The test has 15 questions.